"The eight elective seminars we all undertook during our two weeks at YYGS, taught by current Yale College students, were equally interesting and allowed us to explore different opinions on various topics, enabling us to receive a more global perspective."

It’s been one day since the end of my time at the PLE session of YYGS and after a flight back across the pond I’m sat on my bed back home in London, UK. 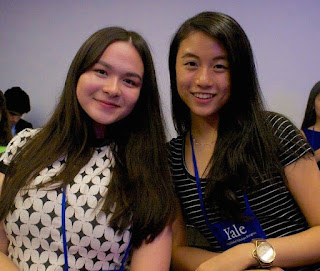 To say that I miss being on the Yale campus and attending the many activities of the YYGS programme would be an understatement. The lectures we were lucky enough to be given each morning by renowned professors (including Akhil Amar, Sterling Professor of Law and Political Science and Oona Hathaway, Gerard C. and Bernice Latrobe Smith Professor of International Law) were inspiring to say the least. This was so much the case, in fact, that eager questions and thoughts (on topics some of us had never encountered before) were encouraged. The eight elective seminars we all undertook during our two weeks at YYGS, taught by current Yale College students, were equally interesting and allowed us to explore different opinions on various topics, enabling us to receive a more global perspective. My seminars ranged from ‘John Locke and the Imperial Foundations of Property Rights’ to ‘The Challenges and Advantages of Two-Party Systems’, and I miss being able to have such exciting and valuable discussions with my group.

Thinking about it now, I even miss the Capstone Project that we all completed while there. Although writing the academic report was certainly exhausting at times, especially given some of the midnight deadlines, I can now appreciate how rewarding this opportunity was. Not only was I able to bond with my three teammates, but also was able to work on my public speaking skills in our presentation, and delve deep into researching a case relevant to ‘Information, Technology and Power’ (my assigned topic). My group looked through court cases and articles pertaining to Google’s alleged privacy infringement on its users through the creation of their Street View project, and came up with a solution we felt could be a step to resolving this issue.

Most of all, however, I miss the people I met while at YYGS. The PLE programme this year represented over 90 countries, which is astounding and something that we all truly appreciated. Being able to collect first-hand insights into various countries, whether political, economic, societal, cultural or another aspect entirely, was a chance few of us will have looked over while there. I am grateful to now know people from across the world – the US, Canada, Indonesia, Australia, Pakistan, Mexico, to name but a few countries – which is something I never really thought possible before going to college. As the director of YYGS, Ted Wittenstein, put it to us at our final lecture of the session, we now have a network with admirable and inspiring individuals. I know I’ll cherish this gift as I stay in contact with my new friends.

As a rising senior, I unfortunately won’t have the chance to be a student at another YYGS session; however, I would encourage anyone who is eligible to attend a future session to apply. It really is a once-in-a-lifetime opportunity, and one that I wish I could relive many times over.