"At the end of it, it occurred to me that it was alright not to always have something to say – but to always say anything you have."

Comfort zone: a place or situation where one feels safe or at ease and without stress. For some, venturing out of this self-defined zone is a terrifying prospect; and many who champion themselves as ‘adventurers’ have really only shuffled past the border of familiarity and strange terrain, under the guise of ‘stepping out’ of it. I used to fall under the latter category, and it was not until I arrived at Yale campus, anticipating my two-week stay, did I stop to re-evaluate what I really considered as ‘stepping out of’ my comfort zone. 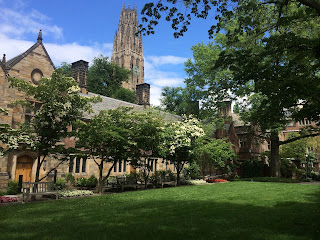 Being a more reserved member of the programme compared to other more outspoken, expressive students, it took a while to get accustomed to the discussion-heavy format of academic life. Even post-lecture discussion sections encouraged us to rethink certain parts of the information given – and such emphasis on asserting our opinion and taking other people’s interpretation into account was something I was initially unfamiliar with. Every seminar was comprised of high-calibre questions and arguments, making every one of them incredibly thought-provoking. The topics of the seminars ranged far and wide, and more than once I found myself incredibly out of my depth in the midst of heated debates. Far from being demoralising, being exposed to unfamiliar fields of study proved to be a chance for me to discover an interest in subjects I would have never even considered exploring. Peers and instructors alike motivated every participant to voice out their thoughts, to get over the initial self-consciousness that always came with a room full of eager students. At the end of it, it occurred to me that it was alright not to always have something to say – but to always say anything you have.

Amongst the many things that left a deep impression on me are the curiosity and interest in the different traditions and religious views that were represented in the program. Nearly every day, I was approached by many of my peers who were inquisitive about Islam. I was asked politely about many things; from the reasons why I decided to wear a headscarf and what constituted as ‘Halal’ food, to deeper inquiries about my views on some Islamic beliefs and how they compared to other religions – which, needless to say, led to several profound discussions. Many of the questions proffered to me were ones I never thought about asking myself, forcing me to reconsider aspects of my belief that I simply took for granted as the norm. I was met with sincere and thoughtful responses, coupled with the enthusiasm to share opinions of other traditions – a reception that pleasantly took me aback. This proved to be the highlight of my time at Yale; meeting people of my age who were incredibly open-minded and as enthusiastic to comprehend different perspectives and get a first-hand experience of many cultures.

It only occurred to me a few days before leaving the Yale campus that I had stepped out of my old comfort zone – only to make a new home in the common interests, opinions and memories I shared with many of the students. The experience allowed me to redefine ‘stepping out of the comfort zone’ as not just making the unknown known, but as a journey of redefining what I thought had already been defined – and perhaps (sorry for the cliché) uncovering hidden parts of myself in the process.