"Young people in today's society could often be neglected, but at YYGS, we were taken seriously and every instructor listened to our opinions and ideas with respect and truly believed in us." 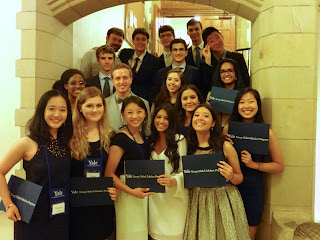 From July 9th to July 22nd, I participated in the International Affairs and Security session of YYGS. It was, without a doubt, the most transformative two weeks of my life.

Before arriving at the program, I was anxious because all the brightest minds from around the world are coming together, and I wasn't sure if our differences in culture and opinions would set us apart. However, as soon as I started meeting people, all my worries went out the window. I never expected to make friends so quickly and so naturally. Everyone was so genuine and eager to share what they thought about the world. I was honestly surprised to find people who actually found pleasure in discussing the Cold War, the EU, or the Iraq-Iran War when it wasn't required in the classroom.

Although the program was extremely intense and we had a lot of work, I still loved every minute of it. It was really meaningful to see that experts, who are extremely talented and qualified in their respective fields (Professor Gaddis, Malvesti, and Sullivan etc.) actually took the time to answer our questions and genuinely believed that we are the leaders of tomorrow, who could make change. Young people in today's society could often be neglected, but at YYGS, we were taken seriously and every instructor listened to our opinions and ideas with respect and truly believed in us. I did not expect to find that sense of empowerment and I can definitely say that this program has taught me to be more confident.

Not only did the program challenge me to think critically and consider new perspectives, it also debunked some of my beliefs about group work. Many of us usually don't usually enjoy group projects because we would end up doing a large portion of the work. However, at YYGS, that was not the case at all. I learned that when you place trust in others, and when you divide up the work evenly, there will be so much more insight in the work than if one person just did it all. I loved that feeling of being able to trust my capstone members, knowing that we would all do the work to the best of our ability.

I can probably say that I have learned more about global affairs in the last 14 days than I have in my whole school year, as the program is specific and targets many relevant topics. From ISIS to the Haitian Revolution, from the Iran nuclear deal to religious conflicts, the students explored just about every “hot” topic. After each day, I'd feel so fulfilled and proud of myself for having accomplished so much in one short day. I'm so glad that I took the time to journal every night about my day, so I can remember everything that happened.

Although many parts of the program were memorable (the BBQ, dance party, family time), the conversations I had with my peers stood out to me the most. I will never forget the discussion we had after watching The Square (a documentary about the Egyptian uprising). My friend from Tunisia shared his similar experiences in the Arab Spring, and later on, my friend from Afghanistan told us that he has seen car bombs explode near him. Coming from Canada, I never realized that these things could happen to people so close to me. Watching revolutions on TV, and hearing about them from friends who have actually lived through them are two extremely different experiences.

I never thought I could learn so much in such a short amount of time. Not only were the lectures and seminars amazing and informative, the career and admissions talks were incredibly helpful as well. Before the program, I wasn't positive if I wanted to go into International Relations, as I was wavering between sciences and arts, but after these two weeks, I know that this is what I am meant to do. Learning about global affairs just feels right and I think I'm starting to feel what Professor Negroponte felt about diplomacy at age 15. This realization has come at the support and guidance of my instructors, and I could not be more appreciative. Now that I'm at home (although suffering from post YYGS depression) I feel so much more determined and inspired, because I have a much better idea of what my future will look like.

I walked into the program feelings anxious, unsure, and hesitant, but I walked out of it feeling not only determined, inspired, and transformed, but also with 205 new friends from 92 different countries. I will never forget YYGS.