"Nobody fits in because everybody stands out uniquely. There was no time for homesickness as the days would be occupied with fun and challenging new experiences." 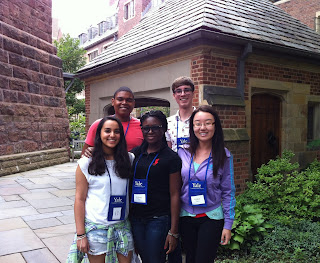 “Congratulations! You have been accepted to the Yale Young Global Scholars Program…” There were no words to accurately describe the emotions that were swirling in the moment I read those words. I felt exhilaration, delight, but then fear. Would I be homesick? Would I fit in? Once beginning the program, I quickly became aware that the answer to both those questions would be “no”. Nobody fits in because everybody stands out uniquely. There was no time for homesickness as the days would be occupied with fun and challenging new experiences.

The idea that I would one day have the opportunity to study on Yale campus never occurred to me, yet there I was, a normal Canadian teenage girl, in the same room as Yale professors, internationally renowned speakers, and erudite students from around the world. I guess you could say the excitement got to me because just a few days before the most preeminent program of my life, I unfortunately began coughing. I had caught a cold.

There I was on the first day of International Affairs and Security coughing during check-in, coughing during the informational orientation with the director of the program, Ted Wittenstein, and coughing during my inaugural meet-up with my “family”, an assigned group of students that would later become a part of my true family. I believed that this was a foreshadowing of how the entire program would continue, but it resulted to be the exact opposite. It was unbelievable how warm-hearted and caring all the staff were about us. One of my most memorable moments, aside from debating about the sovereignty of the Arctic in the Capstone project and partaking in the India simulation, would be the car ride with Yale Security to attend a doctor’s appointment at the Yale health clinic. This demonstrates the extent YYGS staff go to ensure that students are safe and healthy, and I will remember their kindness for eternity.

Aside from the friendly staff, there were the students. At first, I was skeptical when Ms. Erin Schutte said there would be formations of life-long friendships. How was it possible to form long-term friendships with people that typically reside halfway across the world from me in simply two weeks? But Ms. Schutte was correct. It was definitely possible, even inevitable, because I was surrounded by outstanding, sweet students that were impossible to dislike. It was on the last day following the graduation ceremony that it truly hit me how hesitant I was to leave everyone. However, I knew that we would all meet again someday, whether that be in a few months or a few years, and we would continue to make more of those everlasting memories, such as playing foosball in The Buttery or simply chatting in the JE courtyard.

These two weeks have been the best two weeks of my life. Even a month following the end of the program, I constantly reminisce about the infinite memories that were made and remain in contact with the many friends that I had the fortune to meet. I still wake up on some mornings thinking I’m in Jonathon Edwards. This program truly has refined my interests in international affairs and given me the opportunity to experience the college life. IAS 2015 may have ended, but it will always remain running in my heart because in a sense, this program never stops. It will always be remembered.