"Although we were all from different corners of the world and had different stories and perspectives, we all shared an eagerness and passion for learning." 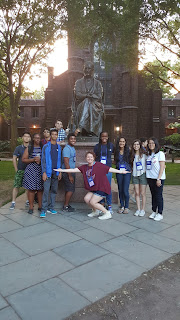 After a twenty hour flight and a three hour ride from the airport, I arrived to New Haven wanting nothing more than a long, restful nap. However, as soon as I stepped out of the airport shuttle, all traces of fatigue disappeared and were replaced by awe as I gazed at the gorgeous historic campus that would be my new home for the next two weeks. It felt as though after all these years, I had finally received my hogwarts acceptance letter.

Each day at YYGS was filled to the brim with activities, from engaging interdisciplinary lectures, to thought-provoking discussion sections, to fascinating seminars. Without an abundant physics or chemistry background, I was reluctant to participate in lectures and discussion sections. However, it soon became clear that YYGS was a welcoming environment for me to ask questions and absorb all of the new information. I came to realize that instead of limiting myself to material covered in school, I should feed my curiosity about fields such as nanotechnology, robotics, and astronomy.

Discussions were not limited to everyday lectures, seminars and discussion sections. From conversations in the common room about religion’s role in society, to instructor led diversity dinners about the dangers of a single story, there was no limit to the uncontrollable enthusiasm and curiosity of YYGS students. Of course, who can forget about the brilliant individuals whom I had the opportunity to get to know. I can say without a doubt that meeting new people can be terrifying for me. But this wasn’t the case at YYGS. Ten minutes after check-in, I was already exploring New Haven with my newfound friends who had intriguing backgrounds and seemed equally intrigued about me and my home country. Although we were all from different corners of the world and had different stories and perspectives, we all shared an eagerness and passion for learning.

While the intellectual and academic rigor was an important part of YYGS, we were able to unwind during each day’s highly anticipated freetime. The options were endless, from relaxing in the courtyard, to enjoying a late night snack at Insomnia Cookies or Froyo World, to playing intense foosball matches downstairs in the buttery.

Overall, I will never forget my two weeks at Yale. I met some of the most brilliant people from all over the globe, with whom I engaged in eye-opening conversations. Most importantly, I learned about what it means to be a learner. It occurred to me that it is all right not to have all the answers and necessary prerequisites when presented with new information, as long as you ask questions and try to get the most out of each experience. The beauty of science is that we do not have all the answers. As Dr. Honsberger mentioned in the opening lecture, ignorance is the most important characteristic of scientists, because it leads to curiosity.