"I was amazed at how there had previously been such a tremendous disconnect for me between all these bits and pieces of information drawn from a multitude of classes." 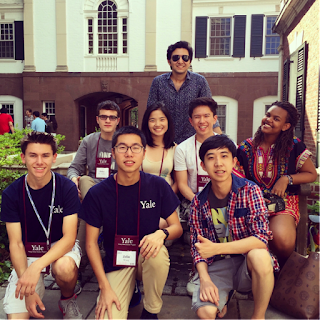 It all began when I was speaking with another YYGS student. Melanie, about how classes were structured in South Africa where she studied. When we got to some common ground regarding the literature we had read, it dawned on me how global education truly is. On one hand, I was among my peers in Arizona, reading about the story of African societies impacted by colonization, and in South Africa, students were delving into a story with deep historical roots, and our different interpretations and understandings were incredible.

As we got deeper and deeper into the conversation, Melanie described the real and horrific implications of the events seen in Things Fall Apart. Back in Arizona, my European History class had extensively covered colonization in Africa by European powers while also discussing the social and cultural impacts of a story like Things Fall Apart in Literature class, but now in the courtyard of a small residential college, Melanie was helping to put it all together. For instance, she illustrated how the long lasting impact of social stratification between the Hutu and Tutsi people in Rwanda was instilled by Belgian control and influences and how it ultimately led to the Rwandan Genocide. I was amazed at how there had previously been such a tremendous disconnect for me between all these bits and pieces of information drawn from a multitude of classes.

I think that this was the kind of experience that truly stood out to me about YYGS. For just two weeks at Yale, I was able to meet people from more walks of life than I have probably ever been exposed to, and everyone brought something new to the table. It is one thing to sit in a classroom and learn from a whiteboard or from peers that shared a rather homogeneous background, and it is another to be in an environment that has brought together people who view the world with completely different sets of eyes.

At Yale Young Global Scholars, I think the learning process does not cease when students leave a classroom. Instead, I think it is amplified because the students are all driven to continue their discussions and debates while also digging deeper for a more cohesive, thorough understanding of a topic. In addition, simply being among such a diverse group of peers meant that I had the opportunity to meet some amazing people that have changed the way I view the world. Not only was there Melanie, but also there were so many others. I remember some insightful yet hilarious and kind friends from Philadelphia, New Hampshire, Australia and Colorado. I had truly compassionate and friendly suitemates from China, South Korea, Canada, and even Syria. I smile every time I remember a girl from China ready to start a revolution, and lastly, I found someone tremendously thought-provoking, funny, and outgoing in my roommate from Illinois. I think the hallmark of YYGS is that it brings people together both in and out of the classroom in order to create a global community and family that illustrates true unity.