"YYGS also taught me the true meaning of intelligence. Intelligence isn’t just about being smart. It is about being open minded, compassionate, and most importantly, curious."

On Sunday morning, I checked into Branford College and received my blue name tag, a fan, and keys. As I stood outside my room, I heard a “Hello!” from the next room over, and so began my journey as a Yale Young Global Scholar. 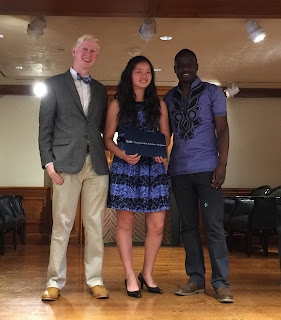 Perhaps the most valuable thing I got out of YYGS is exposure, both academically and culturally.

I did not expect to be introduced to the various fields in math and science as I did these past two weeks. I explored fields that I had little knowledge about but was interested in, such as environmental engineering and infectious diseases; but, I also explored fields I never even thought about, such as astrostatistics. I am extremely grateful for the fact I was able to explore my interests in this program because there are not that many opportunities to do so at a traditional high school. Thanks to YYGS, I have a more solid understanding of what I want to do going into college and for the rest of my life. YYGS also taught me the true meaning of intelligence. Intelligence isn’t just about being smart. It is about being open minded, compassionate, and most importantly, curious. I will never forget the words, “Being intelligent means never being bored.” Dr. Honsberger’s words will be forever ingrained in my brain, and I thank him for that.

Now, YYGS also gave me exposure to different cultures through the diversity of the program. One of my fondest memories of YYGS was from my first night there: June 18th. That first night, a group of 15 to 20 of us FMS and SDSE students sat on the Saybrook porch and got to know each other. I met people from Saudi Arabia, Brazil, Tanzania, Kenya, Mexico, and some places I couldn’t even pronounce! It was amazing how easily we formed connections despite our vast differences in background. The next thing you know, someone pulls out their speaker and blasts “Despacito.” A few seconds later, we were having a jam session! I thought to myself, “Man, this is going to be an unforgettable two weeks.” The sense of community didn’t just stop there. At the dining hall, people took the leap of faith and sat with strangers and struck up conversations left and right. Two weeks later, they’ve become their own version of the Breakfast Club. Our discussion sections, simulation groups, and capstone groups all became family. “Unforgettable” is certainly not a strong enough word to describe the past two weeks of my life. I met people I will never forget and heard stories that will remain in my heart forever as motivation to make the world a better place. The sense of community despite the great diversity made me realize that it is possible for people of all different backgrounds to come together and embrace different cultures, ideas, and philosophies. These people have empowered me through their struggles and triumphs, proving to me that the world needs change, but change also needs the world.
Labels: 2017 FMS