"Being at [YYGS] felt like being in an intensely intellectual and strangely liberating world. I was surrounded by strangers that soon became friends. I talked freely to my heart’s content." 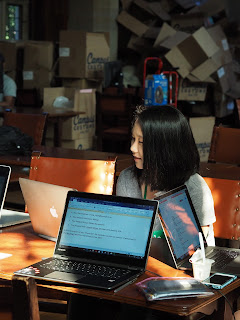 My heart thumped like a bass drum on steroids, excited and nervous at the same time. It might go without saying, but Yale is a beautiful school. With soaring arches and twisting staircases, it looks like a centuries-old castle. As I walked into Saybrook College, I felt like I had entered a real-world version of Hogwarts. The bells of Harkness Tower rang in the background and I couldn’t help feeling swept up in the magic.

I shared a suite with five other lovely girls coming from Singapore, Germany, China, and Connecticut. I was thrown into a global community, with students from Ethiopia, Mexico, Kosovo, Turkey, the list goes on. I was finally able to put faces to the names of countries, and learn from unique stories and perspectives. I met a Tunisian girl from South Africa who didn’t wear her hijab in the U.S. due to the implications of doing so, I heard a girl from Palestine recite a poem “We Teach Life, Sir” that moved me to tears, I learned how to curse in Arabic from my Tunisian friends. While we were all coming from different countries, I was immediately struck by the similar intellectual curiosity that lit up every person I met. My conversations spanned from discussing Marxism to talking about the refugee crisis. I realized how little I knew about the world.

I applied to this camp because although I am typically seen as a STEM student back at home, I have always had a deep interest in politics, law, and economics – the three things that run our world. In today’s society, there is an unspoken understanding that debating political issues in public is considered inappropriate. Here, it was encouraged. I attended lectures from Sterling professors like Akhil Amar or Harold Koh, and was able to ask them questions face-to-face. Emma Sky’s lecture on ISIS was enriched by the knowledge from students living in the Middle East and North Africa. In my seminars, I studied a variety of topics including modern-day fascism, indigenous land rights, conflict minerals, and more. I even found myself agreeing with elements of Marxism (thanks John Whalen). For my two-week capstone project, I investigated the effectiveness of Swedish and U.S. refugee resettlement programs in the face of the recent Syrian refugee crisis. Over the course of two days, I acted as a member of the Malawi government struggling to solve a famine. Everyday, my schedule was packed full to the brim and I always fell asleep exhausted in the best way possible.

In the midst of a crazy schedule, there was still time to have fun. I’ll never forget the late-night visits to Ashley’s to get ice cream, or singing my heart out with the BBS kids at the Branford piano. Being at this camp felt like being in an intensely intellectual and strangely liberating world. I was surrounded by strangers that soon became friends. I talked freely to my heart’s content.

As I write this on my flight back home, I am overwhelmed with a sense that this is both a beginning and an ending. I am returning home to the world of driver’s ed and summer assignments with far more than goodbye souvenirs. I am returning with a new perspective. I am returning with a deeper empathy and appreciation for countries all over the globe. I will most likely forget the Ricardian model and the ethics of cybersecurity, but I will never forget the friendships I made and what it felt like to learn at Yale.
Labels: 2017 PLE