"Due to the astounding warmth and goodwill of the YYGS community, I surpassed all of my previously set limits."

2017 ASE
Sera from the United Kingdom 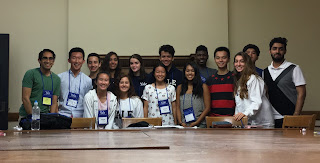 Before YYGS, I believed that betterment of the self came from within. Your experiences could make you slightly more compassionate, or a tad more socially aware, but the rest of what you are like is determined at a young age and doesn’t deviate much from there. However, the experiences I had at YYGS proved to me that those ideas are far from the truth.

Arriving at the Yale campus for the first time, I had no expectations for myself: educationally or socially. I never spoke much in class, so I wouldn't speak up in seminars. I’d never been the social butterfly, so I wouldn’t end up making many friends, let alone very close friends. However, due to the astounding warmth and goodwill of the YYGS community, I surpassed all of my previously set limits. The self-confidence I now carry from having been my uninhibited self will follow me for longer than I can comprehend.

Through this, I saw that the most damaging thing you can do to yourself is underestimate yourself,
and at YYGS I realised just how much that is done: by me, but also, sadly, by many others. I remember how many people told me that them getting accepted to the program was “some sort of fluke” and that they didn’t “belong” there. It was absurd to hear such intelligent, friendly, generous people put themselves so harshly down. The people I met at YYGS were not only the most knowledgeable and motivated people I have ever encountered, but were also the kindest, most selfless and most resilient. Being around them redefined my ideas of true intelligence and goodness; I cannot thank them enough for letting me get to know them.

My admiration for them made me realise that I, too, deserved a similar admiration from myself. Just as they had claimed that they didn’t belong, I also felt like I wasn’t meant to be among such talented and accomplished people. But we had all worked hard to get there; we are all deserving of acceptance, most importantly, from ourselves. I take comfort from remembering that we are all on the same journey to greatness, and can help each other along the way.

Leaving the Yale campus, I tearfully resigned to the impossibility of ever being in a place where I had felt so accepted and happy. But in reality this acceptance, once received, will never be taken away for any of us. YYGS allowed me to realise that the home created for us during those idyllic two weeks has not just disappeared. We are now a family that is spread out, rather than taken apart. We have somewhere to stay in nearly every country now, and someone to speak to at any given hour on the globe. Our bonds are stretched over continents and oceans - the safe space YYGS had created for us, where we can encourage each other and accept ourselves, is all-encompassing of the entire planet.
Labels: 2017 ASE