"I was surrounded by people who were constantly talking about important international issues, sharing innovative project ideas, exploring each others’ cultures, and learning about the subjects they’re most passionate about."

One of my most memorable moments during the program was when I was walking to lunch with a group of friends and I heard someone yelling out my name. I turned around and I saw this girl who was waving at me. It was something about the way she pronounced my name correctly that made me yell out “tounseya?” which translates to “are you Tunisian?” And indeed she was. 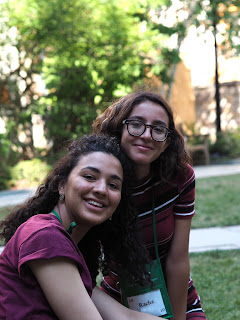 I’m Racha, also known in YYGS as the talkative Tunisian girl. I’m 17 years old and a sophomore in a Tunisian public high school.

Before I tell you about my YYGS journey, I think it’s important for me to mention the journey that got me there. I can’t exactly recall how or when I first heard about Yale but I know that I learned about it from an American movie because that’s how foreign kids my age learn most things about “the American lifestyle.” At the time, the idea of visiting Yale was such a far-fetched dream that I couldn’t possibly say it out loud.

But that changed when I first heard about the program in the summer before I became an exchange student in the US. Two Tunisian alumni had just returned from it, and I was urging them to tell me all about it. Seeing Tunisia represented in a program such as YYGS brought me such genuine joy and hope. I was happy to see that people from my country could participate in such activities and hopeful because my dream wasn’t as far-fetched anymore.

I didn’t know about the Middle East Student Leadership Award back then but I still applied because this wasn’t an opportunity I could miss.

Since I was an exchange student in the US with a J1 visa when I got accepted, I had trouble getting the B1/B2 visa in time to attend the session I was first assigned. I was surprised by how helpful, patient and supportive the YYGS staff was throughout the process. Thanks to them, I finally arrived to the Saybrook campus to attend the PLE session with my two Tunisian friends. Whether you’re a Harry Potter fan or not, you can immediately notice the uncanny resemblance between the campus and Hogwarts. From the castle-like architecture, to the chilling carillon melodies coming from the Harkness Tower, life felt more magical, and reality was more like a dream.

I was assigned a suite with two wonderful young ladies. One from Australia who was surprisingly an extremely talented juggler, and the other one (who broke all the stereotypes about Californian girls) was indeed from California. The mixture of the brogue Australian accent, the mildly thick Arab accent and of course the Californian one, did cause some confusion but didn’t stop us from having our late night talks at the end of every long day.

At first, I was certainly intimidated since I’ve never been around such a fascinating, creative group of teenagers before. There, I was surrounded by ones who were constantly talking about important international issues, sharing innovative project ideas, exploring each others’ cultures and learning about the subjects they’re most passionate about. They were trying to take part in the conversation that usually doesn’t involve them yet affects them.

As cliché as it may sound, I am certain that these teenagers will be the ones to change the world. In YYGS, not only do you meet people from all over the world and discover their cultures but you also re-discover yours in a whole new light. I made friends from drastically different backgrounds and I saw scholars break years of tension and hatred between their countries just by having a conversation over a warm cup of coffee at the famous Blue State Coffee shop. These odd friendships weren’t the only ones that were teaching us lessons.

From the captivating lectures lead by Yale faculty to the seminars taught by amazing Yale graduates and undergraduates, we were learning extremely important lessons. Whether you agreed with lecturers such as Akhil Amar or not, you could clearly see the inspiring amount of passion and devotion that goes into their work. Special lunches like the one with instructor John Whalen or the other with YYGS Program Director Erin Schutte Wadzinski made me not want to leave the dining table and not just because of the food. Two different yet equally brilliant, inspiring and thought-provoking individuals.

A huge portion of your time during this program goes into working on the Capstone project, which starts by being the students’ least enjoyable part about YYGS then turns into one of their favorites.

At the end of the two weeks I felt like an improved version of myself.

I developed more ambition and a better understanding for politics, law and economics. As I mentioned numerous times during the program, I aspire to be a lawyer and this definitely helped me make progress towards that goal.

Programs like YYGS teach you to dream bigger as long as you turn your dreams into goals and work for them. I thought that studying in an American university would be impossible for me but this program taught me it isn’t, so I will be applying to Yale and I will be working to achieve my goals.

If it weren’t for the scholarships offered to students like myself, I wouldn’t have had the opportunity to live this amazing experience. Thank you for giving me the chance to do so.  --Racha
Labels: 2017 Middle East Student Leadership Award scholarship PLE