"My self-centered way of looking at this world diminished; I started realizing the significance of cultures and different civilizations. I was privileged to respect and be exposed to different ethics and doctrines."

My name is Nadim, I come from a distant land, 5724 miles to be exact, from a country called Jordan. It is an island of peace in the heart of the troubled Middle East. I come from the best school in the region, called King’s Academy which is a derivative from Deerfield Academy. His majesty honored his people by sharing his experience with the new generations of Jordan. YYGS was an unconquerable goal, but with the grit, resilience and determination I extracted from my experience at King’s, it was achievable. YYGS introduced me to see the world from a new lens, just like how the theory of relativity brought a new perspective to Newtonian physics. 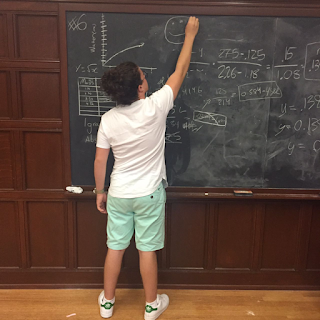 In King’s Academy, diversity is a miniature scale in comparison to Yale. This was what I cherished and took advantage of the most. It enforced the principle of Global Citizenship in my school and expounded it to a higher extent. My self-centered way of looking at this world diminished; I started realizing the significance of cultures and different civilizations. I was privileged to respect and be exposed to different ethics and doctrines. The most important thing I learned at Yale were the long term skills that are not limited to: communication, research, analysis, questioning, etc.

The biggest benefit of YYGS was embodying responsibility in my character and establishing a sense of integrity. I learned how to effectively juggle my assignments, and time myself so that I enjoy both the essence of work and accomplishment. YYGS invigorated my timeliness, and it made me view it as a sublime concept which became my everyday achievement. The most memorable moments, in addition to the dining hall food, Shake Shack and Walgreens, was group work. I cherish collaborative work, because I believe when two or more brains convene, it’s a moment that depicts a sacred act of creation.

‘Sapere verdere’ is a principle that Leonardo Da Vinci called, “knowing how to see”. With group work at YYGS, my peers’ insights uncovered missing knowledge in something I call the pertinent negative. The pertinent negative is a combination of gaps in my knowledge, that I figure out when I work with other people. It’s a moment of epiphany and revelation, that boosts my morale and appeal to proficiency. This demonstrates my goals to become some cognoscente, prior to becoming a scholar that is bound to rules and regulations.

I had several conversations about 9/11, with peers from different parts of the world. Those conversations enabled me to see the issue from different perspectives, since the way Arabs viewed it challenges the beliefs of the Americans. I didn’t have any sort of bias, but my sound judgment didn’t make it possible that plane crashes can demolish entire towers. With YYGS, I got to respect and appreciate the American perspectives and how it shattered their security and sense of safety. But my stance is supportive of George Bush’s quotation when he said, “Terrorist attacks can shake the foundations of our biggest buildings, but they cannot touch the foundation of America.”

My plans for university were mutated after I attended YYGS. That’s because it developed my awareness on how the protocol of universities function. It shed the light on new variables to consider, such as the type of city the university is in, how demanding the workload is, how effective its principles’ are, and most importantly its capability of transforming me to a knowledgeable man. After visiting Yale, my goals soared up to becoming Emerson’s American Scholar like joining a community similar to Harvard’s Phi Beta Kappa Society. Yale taught me that the choice of university should far exceed being part of a prestigious community, but one that instead focuses on transforming my dexterity to the maximum.

“I am the Master of my soul, I am the captain of my fate” –Invictus by William Ernest Henley. This phrase sums up my transformation at YYGS. To extrapolate this phrase, I felt that by the end of the program, I was reborn a legend. As a scholar, I now value the love of learning and knowledge, propelled by my insatiable desire and curiosity to know more. My perspective on this program reflects on all the lectures I took. I learned that as long as I love what I am doing, and make myself see that what I am learning is fascinating; it makes me capable of perfecting it.

After YYGS, it helped me formulate long term goals, with the slogan, “Love what you do, perfect what you love.” I want to reach out to fields, that will be the fuel to my contentment, bliss and honor. With the numerous lectures that always left me in thought, I seek to choose the best of which I can excel and achieve. This gave me a new perspective on medicine such as CRISPR and how more than one field can amalgamate together, giving birth to futuristic fields like biomedical engineering.

This experience had activated the cogs of my brain, which I hope will never stop rotating. BBS gave me the chance to imagine, hallucinate, think creatively and productively. I loved how this program’s goals and syllabi were not incarcerated within the borders of a book, and I hope it will never be. Albeit the lectures were challenging, they allowed me to experiment, learn and experience. With some instances of anxiety and stress, I will aim to have my head bloody, but unbowed.

In YYGS, every human advanced to resemble a precious treasure that I am in need of scavenging. Without my peers, I would have not been enlightened with most of the 6 types of knowledge that are: priori, posteriori, explicit, tacit, propositional and non-propositional. Walking through the road of enlightenment in YYGS, I would have not learnt this much, if it wasn’t for them.

As I transform, I juxtapose the past with the present to see my progress. My transformation should go through an eternal cycle, and I hope I have left the same imprints on others in YYGS, just how they left theirs on me.
Labels: 2017 BBS Middle East Student Leadership Award scholarship