"The growth I have seen in myself as a result of YYGS has been exponential, and the repercussions on my life, immediate. I see the world differently now, and have a more holistic and complete view of other nations and humanity as a whole."

Months before I even checked in at YYGS, I made the mistake of creating a false perception of it in my mind. The vision that I had misconstructed was that my main purpose there is to learn as much as I can about International Affairs and Security (IAS), talk to the lecturers and professors, and extract as much information as I can from the gold mine of knowledge available to us. WHAT A MISTAKE THAT WAS. 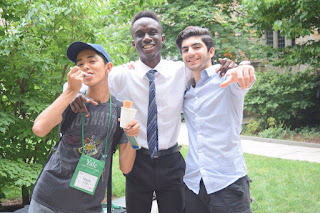 Don’t get me wrong, although learning about IAS was an important part of my YYGS experience, I came to realize that sifting through readings or listening to professors wasn’t the only valuable resource I had at my hands; something else proved to be more precious and dear to me. I say without a shadow of a doubt that I will be most grateful to YYGS for giving me the opportunity to befriend people from around the world. It is said that travelling the world is the best way to expand the borders of your mind because of the interactions you will have with people from different cultures. For people who don’t have the means necessary to do so (like a highschooler), coming to a program like this one is the next best thing.

But despite these remarkable differences, the four of us talked and had fun like any other group of young people would. I was awed that four teenagers from four backgrounds that were superficially conflicting were able to have the type of vision that harbors unity and friendship. This friendship went so far that some of us even met up and hung out after the program ended! A story like this shines the spotlight on the global part of YYGS and accentuates how beautiful diversity can be.

Truthfully I do have a tiny, yet present, feeling of regret about my stay at Yale. During the nights of the program I’d sometimes think about what I had learned that day, and I must say that on some nights I struggled to point to anything. This was because I traded a part of the learning experience for the social experience and spent more time hanging out with friends than trying to benefit from the lecturers. I remember sitting in my room one night and telling myself that I had to become more focused on analyzing the readings and taking notes during lectures so I can actually benefit from YYGS, instead of talking to people and socializing all the time; I might as well have told the buzzing city to be quiet, or an inferno not to blaze. I realized then that I had been benefiting from the program, just not in the way that I expected to. Priceless was the opportunity to learn from other cultures and ruined was he who didn’t seize it, I deduced.

After talking to some others about their experiences and learning about the variety of paths people took to making the most out of their experience, I realize now that there’s no secret formula or any specific set of guidelines you have to follow to have a great time. The experience is personal to each student. The students don’t need to shape themselves around the program, the program shapes itself around the students.

The growth I have seen in myself as a result of YYGS has been exponential, and the repercussions on my life, immediate. I see the world differently now, and have a more holistic and complete view of other nations and humanity as a whole. Forever thankful am I to all those who made this possible for us all and provided for us a means to refine our characters. THANK YOU :D

PS- If this is being read by a future YYGS-er, keep a daily journal describing the details of your day. Although it may take up a bit of your time in the night, every moment at this program is a precious one, even if it doesn’t seem like it at the time. Trust me, you’ll thank yourself endlessly for sacrificing a bit of time to record your memories :).
Labels: 2017 IAS Middle East Student Leadership Award scholarship