"This experience has influenced me in various ways. I found out that diversity is the perfect way to understand the world, respecting others and being able to hear their opinions which are different from your own."

My name is Shahd. I am a Palestinian national. I was born and raised in the City of Hebron. I am a senior high school student. I was accepted to study at the United World College in China, but I couldn’t go due to financial reasons. 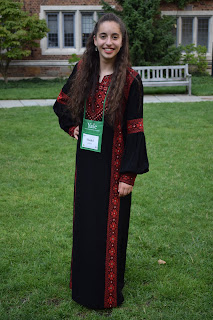 Yale Young Global Scholars was one of the most special experiences I have ever had. It was my first time traveling by myself, from Palestine to Jordan, to Saudi Arabia then to the United States.

The first day I arrived at the campus, I felt so tired, because I have traveled for 46 hours to arrive there, but then I found out that this experience was worth it.

I grew up in a unique political situation, I was 3 years old when I knew what “Curfew” means,  at that age I was wondering why can’t we go out, I was asking my father repeatedly, I was really curious what was happening outside, the more I grew up the more questions I started to ask. Growing up in a city where you cannot leave your home because soldiers are out, have shaped my personality in many ways.

Two weeks of being part of this session has changed my thoughts toward many thing, this program has opened my eyes on the politics in the United States and how it works. At some point I was shocked because the way politics and politicians work in the US is totally different from the area where I grew up, I learned that there could be “Democracy”. I grew up in the Arab World, where there is no such thing as democracy, I really found it useful to expand my knowledge about politics in more than one area.

In the same manner, I think the Arab Spring happened because people were influenced by other countries’ governments and democracies, so they wanted to apply it to their own country. Regardless of the disadvantages of those revolutions, we can see a small part of democracy applied there, a small change, which might be a big change to those communities who have been suffering from dictatorship for a long time such as Tunisia. We have to change even if the result was not as expected, this is a very important point that I have learned at YYGS.

This experience has influenced me in various ways, I found out that diversity is the perfect way to understand the world, respecting others and being able to hear their opinions, which are different from yours was something I strongly learned and practiced at YYGS. I have developed many skills, such as teamwork. I have worked as part of a group many times before, but working as a group was really different in this program. It was really amazing to get the chance to hear the opinion of students from more than three countries, and feel the real diversity.

This program has opened my eyes to many academic specialties at the University. I have been always interested in studying politics and international relations. YYGS has influenced my opinion about economics, I didn’t want to study it, but when I got the chance to attend economic lectures and seminars, I found that this field can be really useful in my study. Everything in the world vitally depends on economics. Therefore, I decided to study something related to politics, economics and business.

This experience helped me build on my personality. I started to see the world from more than one angle. I have dropped the idea of prejudgment from my mind, and it is the way through which I want to develop myself. I feel honored to have had this chance that played and will play big role in my life, whether on the educational, or personal level. I strongly believe that this experience has been the big first step to many more achievements to follow.
Labels: 2017 Middle East Student Leadership Award scholarship PLE