"YYGS not only did satisfy, but it exceeded my scientific cravings. Instructors were as eager as we were to share their knowledge and expertise and cover every area our curiosity probes."

I still remember the thrill of it; waking up for school 6 AM in the morning to find that there has been an update posted to my application. The memory of how I felt, the tingling sensation, the utter surprise that something so distant now lies before me never fails to bring a smile to my face.

Results came out unexpectedly soon – I can only imagine evaluating over 5,000 applications in less than two months to be an impossible task – yet, as exciting for application readers I think as was finding out I have been accepted to YYGS. Undoubtedly, this would be one of the most exciting mornings of my life; my sleep-deprived self that waits to hop on the school bus to get an extra hour of sleep didn’t doze off for a second, instead I spent the entire day thinking of the incredible journey that lies ahead, and cherishing the exciting accomplishment. 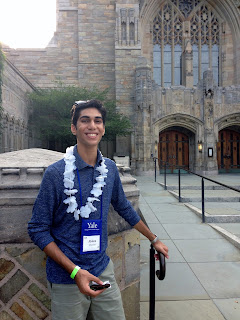 I also remember the thrill of finding out about YYGS, the different sessions, the MENA scholarship; I remember sitting there hyped up, imagining how it would be like - it wasn’t an opportunity to miss. Well, turns out I never missed it, and how grateful am I that I didn’t hesitate to apply. Never on the face of the earth would I imagined in early 2017 to be sitting writing my thoughts now after having attended YYGS.

Yale has always seemed too remote, too unattainable, for how would I make it to be among such a cohort of the brightest and the highest-achieving students and I’m not even the smartest in my school. However, it was one of the most valuable lessons that YYGS taught me that both groundbreaking research and million-dollar-ideas start with the simple things, the “stupid” thoughts which are always overlooked.

I realized that scientists don’t memorize stretches of data and facts by heart, or conjure complex formulas out of thin air. I learned the value of research and questioning, that references are there for a purpose, and that answers only await our questions, await a spark of curiosity or a simple doubt. At YYGS, an instructor gave me a perfect analogy on how scientists tackle problems; it’s that a problem is like a large solid block of ice with the solution at its center, and you can never crack it open, but you start by gently rubbing on the surface and slowly working your way through, until one time, the solution lies there in your hands.

At Yale, I also realized that it’s the little things that make up our unique selves – the diversity of our passions, our experiences, and those seemingly simple yet meaningful interests that give us this… *snaps fingers twice*… this kick, those glinting eyes. For me it meant the world to see the excitement in someone’s eyes when a discussion on what they care about is brought up.

On my first day, I was as euphoric as I’ve never been before, I instantly felt a sense of belonging; how wonderful did it feel to be around those who can instantly relate to you, share your passion and enthusiasm, yet they are from such distant regions of the world that you would spend a lifetime and possibly never meet them - YYGS brought all of us together. It brought together those from regions torn by conflict alongside those who have never witnessed one; it brought together students from such an astounding spectrum of social and cultural backgrounds that I would have never imagined possible – all having a thing or two in common – a passion for science, and the willingness to put that into action.

YYGS was about everything most memorable, especially the most memorable talks. How stimulating and exciting could it be for an Egyptian to talk with an Israeli for the first time about the Palestinian-Israeli conflict, or discuss Middle-Eastern politics over dinner?

Two weeks would never seem enough for making strong friendships and acquiring such a sum of knowledge, but connecting just becomes so much easier at YYGS. I met people with inspiring stories and brilliant minds; this is the sort of environment that drives you to achieve the most of what you can and be the best person you could be. The duration of the program was planned in a way that I made absolutely the most out of my stay and had time to learn and socialize, they were indeed very dense and comprehensive two weeks. I can now advance in my areas of interest of Applied Sciences more confidently, building on all of what I learned at YYGS.

YYGS not only did satisfy, but it exceeded my scientific cravings. Instructors were as eager as we were to share their knowledge and expertise and cover every area our curiosity probes. As academically enriching YYGS was, it was far richer than academics, I learned a great deal about the world and made unforgettable friendships. Also, YYGS definitely influenced my plans for university, it reinforced my interest in science and my determination work even harder to apply for Yale College. Now that I’ve come that close to Yale and its charm, it all seems more real, more achievable.

I am immensely grateful for being a part of this transformational experience, for having applied, and for YYGS’s generosity in providing me with means to embark on such an exciting journey; and it’s nothing short of the truth that this was an experience of a lifetime.
Labels: 2017 ASE Middle East Student Leadership Award scholarship