"I was astounded to find myself surrounded by peers from over 120 countries, all with different talents and experiences."

A True Community of Scholars 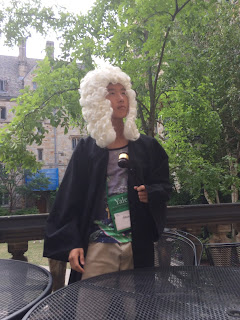 My name is Alan and I am a junior from Syracuse, New York. When I arrived at YYGS, I didn’t know what to expect. However, any sort of expectations that I may have had was quickly exceeded within the first few hours of the program. I was astounded to find myself surrounded by peers from over 120 countries, all with different talents and experiences. Little did I know that there was a characteristic that we all had in common, one that YYGS nurtured and grew: an insatiable hunger for more knowledge and a burning desire to further our understanding of it. From the lecturers to the instructors to my fellow peers, there was an atmosphere of tenacious persistence towards achieving these ends. The first person I saw this in was my suitemate, Harry.

Harry was a jokester, always goofily smiling and cracking some corny joke that we would all bust a gut laughing at. We kept an imaginary bad jokes jar for Harry, telling him to put a dollar in whenever he told one of his telltale jokes, all while laughing hysterically. Harry and I instantly became friends, as we were both runners. I’ll never forget the night when Harry and I stayed up to talk about moral relativism, a seminar I had been in that day. Back in Syracuse, my friends laughed whenever I tried to discuss philosophical topics with them, so it was incredibly refreshing to be able to have a thoughtful discussion with someone about it. After our discussion that night, I couldn’t stop smiling. The mindset that characterized YYGS was especially apparent in the instructors. I particularly remember Adrian Rivera, Quinn White, and Asaf Lubin. Adrian was my discussion group leader. During our discussions, Adrian would occasionally interject with an interesting, relevant fact, or pose a question that would get us all to rethink the topic at hand, all with a sparkle in his eye. I attended a seminar titled, “Moral Relativism” with Quinn. Even though moral relativism was incredibly abstract and complex, Quinn patiently explained challenging concepts within it and pushed us to delve further into the issue. A few of us ended up staying afterward during lunch to further discuss it. Asaf was one of the most widely liked instructors at YYGS, for good reason. During his seminar about spies and their regulation, we were plunged head-first into the world of espionage. Asaf flung foreign terms and concepts at us like Oprah Winfrey giving away items on her show. All the while, his eyes, just like Adrian and Quinn’s, twinkled. The passion these three had for their respective fields was clear as day.

Examples of this defining characteristic were abundant at YYGS; it would take ages to list them all. I’m incredibly lucky to have been able to experience this relentless pursuit of knowledge and have since begun my own journey towards deep and meaningful understanding, searching for the sparkle of passion I saw in my peers and instructors.
Labels: 2017 IAS