"I got a snapshot of university life."

My name is Matthew Lu, and I am a junior in high school from Canada. 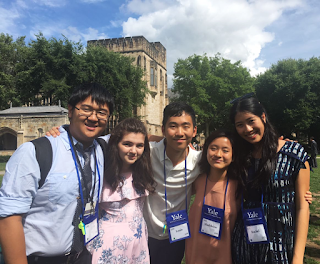 The Yale Young Global Scholars experience was one of the best I have ever had. From the moment I stepped foot in New Haven to the moment I left, it was a whirlwind of adventure and learning. I was, at first, unsure of how the program would unfold. I had done camps before, even camps away from home, but I had never done something on the scale of Yale Young Global Scholars. I was understandably a little nervous to be in a program so far away from home, and at a university as prestigious as Yale. When I found out I had been accepted, I was dumbstruck. I could only manage to say, “Wow,” and that was it! This carried over when I actually began the program. I couldn’t believe I had been accepted to a program with some of the brightest students of the world!

I imagined everyone would be extremely smart, uptight, and very intense. However, when I arrived, I found that this was only partly true. While everyone was extremely smart, my fellow YYGS students were a very lively, accepting group. I found a group of friends almost immediately when I got there. There would be groups of us all over campus, and it was very easy to interact with any one of them. As well, these people came from all over the world.

The opportunity to be introduced to such an intelligent and diverse population was an amazing experience indeed. Not only was I introduced to them, I went head to head against them in card games in the lounge, or furiously tried to defend myself against their attacks in ping pong. These experiences definitely contributed to me enjoying every second of my time at Yale!

My trepidation dissolved immediately once the program began. Not only had I found the people to be amazing, but the pure knowledge contained in the course was astounding. I had a taste of what was coming when I signed up for course, and even then I had a hard time deciding which courses I wanted to be a part of. I wanted to do everything! It was with great difficulty that I selected my top choices, and I looked longingly at the ones I was unable to choose. Once these courses and lectures began I completely forgot about the others. I was so enraptured with the knowledge presented by Yale professors and graduate and undergraduate students that they filled my head, and my notebook which I furiously scribbled notes in. The people teaching us these topics were intimately familiar with them, and in fact, often were on the cutting edge of research on these topics. Being taught by some of the foremost experts in the field introduced me to areas of knowledge I never knew existed before I came to Yale.

Plus, the ability to experience life at Yale was priceless. Sleeping in Yale dorms, eating at Yale Dining Halls, learning at Yale lecture halls, and being able to explore the Yale campus were one of the defining features of the program. Through this I got a snapshot of university life. Before this program I had always dreaded university. It seemed like a looming future that I would be forced to go through. After experiencing Yale, I am now more excited than I have ever been to go through that next stage in life. Since the weekends had plenty of free time, my friends and I would explore the beautiful Yale campus, and experience some of the attractions such as the art museums there.

All in all, YYGS was an experience that I would repeat in a heartbeat if I could. I’ve missed summer programs and the friends I made there before, but never as acutely and poignantly as the YYGS program. They say that people are the sum of their experiences, and I for one am glad that the my sum now contains my time at the YYGS Program.
Labels: 2017 BBS