"I grew not only as a student, but also a person and conscious citizen of the world because of the experiences I had inside and outside of the classroom."

From the moment when I first saw the email from Yale to tell me about their Young Global Scholars program, I knew there was nothing I wanted to do more with my summer. When I heard that I was accepted to the Sustainable Development and Social Entrepreneurship (SDSE) I knew I was being given an extremely special opportunity, but I had no idea of how much of an effect this course would have on me. As a graduate of YYGS, I believe the success of the program can be attributed not only to the work done inside the lecture halls and seminar classrooms, but also through the connections that each and every one of the students make with the campus and with each other. 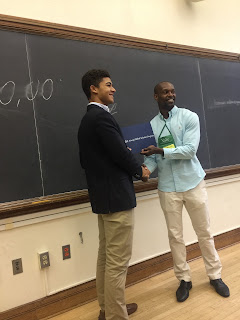 The learning experience that YYGS provides begins much before any student set foot on the campus. Students are able to choose their courses ahead of a time and they are then given required reading so that everybody comes to the course prepared to discuss and grow together. I, however, would like to talk more specifically about my learning experience at Yale, as I took a slightly different route. Despite the fact that we could have chosen our seminar courses, I opted to have Yale choose my courses for me. By doing so, I was exposed to new and interesting concepts, subjects, and theories that otherwise I would have dismissed in pursuit of spending my time at Yale doing only the things I already know. I was very happy with my decision, and I recommend that all future students do the same and allow YYGS teach them subjects that may fall beyond what they are familiar with because that is the true essence and purpose of the Yale Young Global Scholars program.

The greatest attribute of the YYGS program (and the attribute that I would like to focus my blog post on) is the group of people that are drawn to the course. For two full weeks students are surrounded by motivated, diverse and friendly intellectuals. I believe that for any potential YYGS students, my personal anecdote will provide a very accurate example of the type of relationships that you will build within your time at Yale.

As I arrived at the Saybrook Commons on my first day at YYGS I was struck by the beautiful campus, and overjoyed that I would be able to spend two full weeks within the confines the Yale College. I was concerned about whether or not I would be making friends here in New Haven, that is, until I reached my room. Immediately upon entry I was given a warm welcome by two students, one of these people was not even my roommate, just another student relaxing in my room. As time went on, more and more people began flooding my room, many of which who were not even residents of my flat but that did not matter. My first few hours at Yale were spent with my flat mates and a few other friends crammed into the smallest room of the third floor. We all talked for hours and got to know each other. Actually, we were so excited to get to know each other and just converse with each other that we were almost all late to the opening meeting of the program! This group remained my closest friends throughout the course, but the amount of people I met and became close with only increased from this point on. During every seminar I was able to meet and become close to more people. The YYGS established family time provided me with a core group of friends and people that I was able to become close to. The students in my Capstone class became more that just classmates and the hours spent with my own Capstone group allowed us to pick each others brains and grow together. On top of all these opportunities to meet new people, the nights were when everyone became close. During free time at night, a student either spent time in the basement, the commons or around the city and it was impossible to find students in less than groups of at least twenty. It is through this constant interaction with so many different individuals that the students at YYGS become so close. I came to Yale thinking almost only of the educational enrichment I would receive, but I left with a massive family from every country and culture imaginable. This connection does not end, and that is the beauty of the course. I am still a part of group chats and Facebook groups and I know that I have friends anywhere I go.

I am forever thankful for the two weeks I was able to spend at Yale this summer. I grew not only as a student, but also a person and conscious citizen of the world because of the experiences I had inside and outside of the classroom. The only downside to the course is that I had to leave so soon! The Yale Young Global Scholars program gives students an opportunity to get a taste of college life with courses in any subject desirable, an amazing faculty and driven students. As a result, for anyone in search of enrichment of mind and spirit, I recommend the Yale Young Global Scholar program because there is a perfect YYGs experience for all.
Labels: 2017 SDSE