"I learned so much about our global and local environment, about sustainability efforts and ideas discussed throughout the world and even in my own city."

My name is Thea, I was born and raised in New Haven, Connecticut. 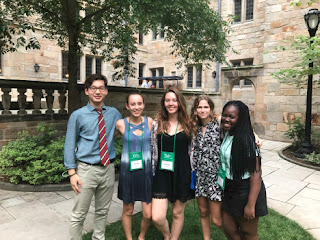 The first day of the sessions finally arrived, so I headed down to Yale. Important information: Yale is about five blocks from my house. It was a very short journey. I arrived at Yale about five minutes later and was bombarded by masses of kids lugging around enormous suitcases. I was deeply confused but then I overheard a conversation between two kids waiting in line in front of me.

“Thank god we are finally here,” one kid said, “I know right? My flight was nine hours long."

That's when I realized how Yale Young Global Scholars stayed true to its word. It really was a global program. People from all over the world were here. A lot of programs out there brag about having tons of diversity but oftentimes you find almost everyone comes from the same state, culture or background. As the days passed and I interacted with more and more people. I was dumbfounded by the sheer amount of diversity. I met people from all over the world. Ghana, Beijing, South Africa, France, Morocco, and many more. Suddenly I had connected with people who spanned the globe, despite the fact that the previous week before starting the program, I had next to none. I was sold at that point.

It was an incredible life-changing two weeks. I don’t say that lightly. The program acquainted me with kids from all across the globe who shared many of my interests. While our interests were aligned, our stories were unique. I gained new perspectives that I had never considered. Our interactions and conversations extended beyond the classroom walls as we all became very close. I still talk daily to many of the friends I made, and am confident I will know them for life. Beyond the everlasting friendships, I got a stellar education and a lot of inspiration.

I learned so much about our global and local environment, about sustainability efforts and ideas discussed throughout the world and even in my own city. The session lectures were given by world renowned scientists and experts working in their field. The program introduced me to an incredible range of topics such as animal conservation and developing renewable energy. It helped me think deeply about about the type of career I might pursue. It was a remarkable two weeks that definitely changed me for the better. If you are intrigued by the program, I strongly recommend you give it a shot and apply.
Labels: 2017 SDSE