"I was no longer a boy who was shy and afraid of sharing his own ideas; instead, the atmosphere at YYGS turned me into an inquisitive person who can engage in a meaningful discussion."

During the ice breaker event on the first day of the program, my YYGS family leader guaranteed that every one of the family members will become a different person after two weeks. Initially, I did not take it seriously, but my own YYGS experience proved the validity of this statement. 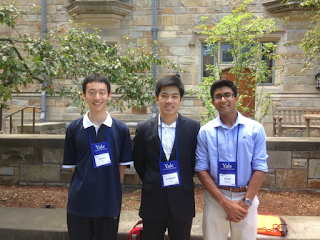 I was astounded by the enthusiasm for learning demonstrated by the people around me. Seminars were enjoyable largely because of the atmosphere that enabled everyone to freely express their opinions. We were able to learn while having fun. By playing a game as investors, we revealed the mentality behind free-riding behavior; in another seminar I attended, we examined the effects online courses have on education by discussing our own personal experiences. YYGS provided me an opportunity to explore subjects that I have never thought of, and that greatly evoked my passion for several areas of study such as the relation between science and philosophy. By the end of the program, I was no longer a boy who is a little bit shy and afraid of sharing his own ideas; instead, the atmosphere in YYGS has turned me into an inquisitive person who can engage in part of a meaningful discussion.

My most cherished memories from YYGS were the moments I spent with my two roommates: an Indian American from Iowa and a Taiwanese American from California. There was always a lively conversation in the living room of our dorm during our free time. The topics of our discussion were essentially everything ranging from music to movies to sports… to even communism! The greatest fun we had with each other, however, was the Taiwanese and I teaching the other Chinese. My Indian roommate put a diligent effort into practicing the Chinese words and phrases we had taught him. I would never forget the joy I felt when my Chinese friends back home were shocked by a video I recorded of him fluently speaking a couple of Chinese sentences. We also had lots of fun with my English. They burst into tears when I boldly asked, “Am I a Chinglish (A person who speaks English with a Chinese accent)?” From then on, none of us could keep from laughing whenever I used a non-standard idiomatic expression or pronounced a word in a weird way.

On one night near the end of the two-week program, my Indian American roommate went into my room and said something I still can recall clearly. “I will miss you, Danny, and all the Chinglish jokes we’ve made together.” Not until then did I come to realize that my friendship with my roommates is as strong as those I have with my best friends. On the day of departure, they insisted on walking me over to the place where I was taking the shuttle bus to the JFK airport. We all felt reluctant to say farewell. Finally, I sat on the bus, leaving the Yale campus. I recalled the concerns I had on the first day: Have I become a different person? After going through so many things in such a short time, I could confidently answer: Definitely yes! Not only for me, but also for any other Yale Young Global Scholars!
Labels: 2017 FMS