"Despite the incredible diversity amongst us all, everyone had a shared enthusiasm for the sciences and a burning desire to delve deeper into learning more." 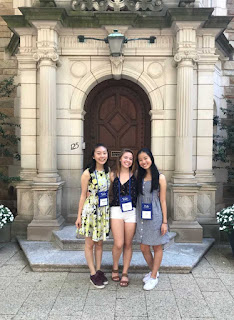 On my first day at YYGS, I remember sitting in a somewhat uncomfortable circle in the basement of Davenport College with seven other girls and our family leader, Grace. The ground was hard, none of us knew each other, and I was a little homesick. We forced our way through some icebreakers that made me all too familiar with the other girls’ names, and I wondered how close I would get to this so-called “family” of mine. Then, Grace instructed us to write some words about our expectations, our fears, and our hopes for the program to serve as a sort of time capsule that we could revisit two weeks later. One of the sentences I wrote was, “I expect to have a really fun and exciting time.”

Looking at those words now, I’ve come to realize that I truly had no idea what was in store for me. Because “a really fun and exciting time” will eternally be an understatement for what was the amazing two weeks that flew by far too quickly at Yale.

The beauty of YYGS lied in how despite the incredible diversity amongst us all, everyone had a shared enthusiasm for the sciences and a burning desire to delve deeper into learning more about them. Within one day, I already met people from the UK, Nigeria, Germany, Zambia, France, Ethiopia, and China. I met someone who spoke six languages, someone who attended a Quaker boarding school, and someone from Britain who hated Harry Potter. Yet in spite of the endless social and cultural differences that existed between us, there we were sitting in the same lecture hall, learning about everything from cholera outbreaks to the convergence of human anatomy and music in improving nursing practices. There we were in the same breakout sessions, discussing religion versus science and the ethics of animal testing. We were in the same seminars, solving murder mysteries, taking notes on epigenetics, and constructing lie detectors. We were in the same simulations, struggling with creating robots and water pumps from breadboards. There we were at Yale, researching and exploring in a unique university environment, a beautiful blend of people from all walks of life pursuing their passions the biological sciences.

But it wasn’t just the academics that made YYGS what it was; my worldview also grew infinitely. I spoke to an Israeli about his opinion on the Israel-Palestine conflict instead of debating the issue in my high school history classroom. I had lunch with a girl from Ghana and we discussed how different the cultures of West Africa and America were in terms of everything from food to gender equality to public education. My East Coast friends took me to Shake Shack for the first time (spoiler alert: In-N-Out is better).

Above all else, the memories I made defined my experience. When I wasn’t reading through confusing but fascinating scholarly articles in an attempt to complete my Capstone project or catching up on lecture readings, I was playing overly heated card games, going for morning coffee runs, or getting ice cream with some of the best people I have ever met. I had no idea that those girls I sat with during family time on the first day, with whom I did awkward icebreakers with, would be the same people I had my arms around as we sang “Hey There Delilah” loudly at karaoke on our last night. The melting pot of ardent, passionate individuals that I was so lucky to form connections with will always be what I miss the most.

There are other little things that made up my YYGS experience, whether it be the ups and downs of residential life, watching my friend sing beautifully at the talent show, or attempting to interpret the meaning of the shovel hanging from the ceiling of the art gallery. But most importantly, I learned so much about being a scientist, a student, and a friend. I had no idea what was coming ahead that first day in the basement of Davenport, but I know now that “fun and exciting” wouldn’t have even begun to describe it.
Labels: 2018 BBS