"I had always considered myself a citizen of the world, but when I came to YYGS, I –for the very first time- got a real sense of what that really meant." 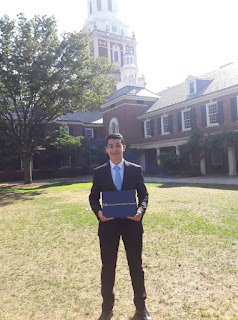 Hello there! My name is Saad, and I am from Morocco.

YYGS had a huge influence on how I see the world. Before coming to the program, I had always considered myself a citizen of the world, but when I came to YYGS, I –for the very first time- got a real sense of what that really meant. I became friends with lots of people from a huge variety of social, cultural, and economical backgrounds, but who all shared the same interests and eagerness for learning, which made us all feel comfortable with each other and showed us what it meant to be a citizen of the world. Also, I am a huge fan of the Latin American culture that I really cherish, so meeting with people from Mexico, Panama, Colombia, Uruguay, and other Latin American countries was an incredible experience that helped me learn a lot more about their cultures, histories, problems, and of course, helped me practice some Spanish.

While at YYGS, I am glad to have learned something I would have never learned in my school, and which many schools around the world don't teach: What is the meaning of science? What is a scientist? Why is science so important in our lives? All these questions were raised during my session, and I got many answers throughout the program.

I had so many amazing moments during YYGS, and choosing just one is a very hard task. Professor Scassellati's "Robots That Teach" lecture was special to me, and I think it was one of the highlights of the program. While I usually try to hide my emotions, I couldn’t help but to shed some tears during that lecture. His research was just fantastic, and it made me love even more the world of technology, computer science, and robotics, as these tools can be used to make extraordinary things, such as the robots that the Professor and his team are making in order to help children with autism. The best part is that it wasn’t just on paper. The team actually developed several models of robots (that will be sold for a cheap price so that everyone can afford them) that did have an impact on children with autism, who showed great results after few months of use. For me, attending that lecture was one of the best experiences I could have asked for in the program, and I am more than proud to have had the privilege of attending it.

Before coming to YYGS, I had always wanted to be a computer scientist. While I only had one computer science seminar at YYGS, I had the amazing chance of (1) having some time to appreciate science in general much more (especially physics and biology, which I thought for a long time were subjects not made for me, which turned out to be untrue) and (2) meeting extremely talented people who knew a lot about different subjects and areas and from whom I tried to learn as much as possible.

I am sure that this summer was the best I’ve had in my life so far, and I am extremely grateful to have had this wonderful opportunity. To conclude, I would like to thank again the whole YYGS team, including the Executive Director Mr. Ted Wittenstein, the Program Director, Ms. Erin Schutte-Wadzinski, the Associate Director of Student Relations and External Affairs, Ms. Amy Shah, the Director of Residential Life, Mr. Josh Block, the Program Administrator, Ms. Tina Saller, the STEM Program Manager, Ms. Michelle Hutchings, the Communications Officer, Ms. Melissa Dwelley, as well as all the staff members, the volunteers, the students, and every single person who contributed to the great success of that program. I want to leave a final note to the Program’s donors: I can’t thank you enough for what you did, are still doing, and will do. YYGS is probably the best opportunity any high schooler can get, and thanks to you, the ability for a student to attend this program is not related to the financial status of a student’s household, but rather to his/her merit, so thank you a billion times!