"I met people from places I couldn’t locate, from places I thought were mysterious, and from places of which I only knew the name. I learned about traditions, languages, geopolitical conflicts, and issues that I never knew existed." 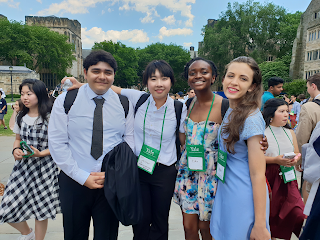 Yale Young Global Scholars was the biggest cluster of ‘first times’ that my brief existence in this world had seen. First time on a long  flight, on the American continent, or in a college environment. First time at McDonalds, at Starbucks, at KFC, or at Shake Shack. First time trying bubble tea, waffles, donuts, Mexican burritos, Indian curry, or Chinese noodles. YYGS made me a better traveler and a better eating machine. But it also gave me what not even 100 years of my country could, it gave me a new way of looking at the world map.

Geography was always fascinating to me. I would be proud of the number of capitals I would know or the number of countries I could name. But having a picture of many, if not most countries on a map deeply changed me. I met people from places I couldn’t locate, from places I thought were mysterious, and from places of which I only knew the name. I learned about traditions, languages, geopolitical conflicts, and issues that I never knew existed. I talked to people from every continent, every ethnicity, and every background. People that I wouldn’t otherwise have met or heard of are now part of this new network that I am proud of.

Being a fluent speaker of Arabic, French, English, and Spanish never came to me as something that special. I was, after all, born and raised in a trilingual country with trilingual parents. Yet, getting to speak each of these languages with its natives made me stand out and deeply improved my self-esteem. Having conversations in Spanish with native speakers was something I haven’t done before- yet another addition to the infinite list of firsts. YYGS also had a very good influence on my English. Continuously stimulating the parts of my brain where this third language was stored and managing to speak it better gave me a great moral boost. I dove into subjects that I usually discussed in other languages. And that helped me a great deal.

The academics at YYGS were also very new to me. The lectures, the breakout sessions, and most importantly, the seminars, were a very dramatic transition from ‘the copying from the board teaching’ I was used to. The seminars were so interesting that I felt regretful not diving deeper and going more into its subjects. This style of teaching made me finally decide that I wanted to apply for schools in the United States.

The last aspect of YYGS that I have to mention is the boarding aspect. I have never shared a room, nor have I ever lived amongst a group of people my age. This experience was incredibly interesting and totally changed my perspective on boarding in general. I loved Pierson College and I hope to visit it again. This experience also helped me decide to accept my spot at the African Leadership Academy in Johannesburg, South Africa- previously, I hadn’t been keen on the whole boarding aspect of it, but YYGS changed that. This is a decision that I am now, being at that very academy, very happy about.

In conclusion, YYGS was the biggest, brightest, and most elegant bridge I have crossed in the past 18 years of my life. A bridge that not only got me out of each and every one of my comfort zones, but also made me face fears I never imagined to get past. This bridge gave me access to a horizon of opportunities and to the greatest network I can dream of.

Applying to Yale Young Global Scholars was without a doubt the single best decision I made in my life. I cannot describe how dramatically it changed me and my perception of the world. And without the Young Leaders Scholarship I would never be able to attend such experience. This scholarship made it possible for me to become a better thinker, a healthy citizen of the world, and hopefully a better leader for the years to come. I could never thank enough the people that made this experience possible for me.