"Living, learning and eating among entrepreneurs, actors and researchers demonstrated to me that I am fully capable of creating new knowledge and solving pressing global issues." 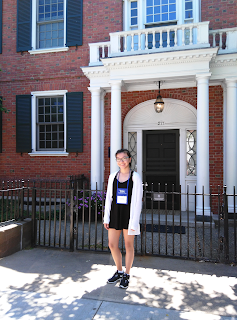 As soon as I received my YYGS acceptance letter, I began to fantasize about how amazing those two weeks would be. I couldn’t wait to arrive at the world famous Yale University and be surrounded by beautiful architecture and brilliant peers who knew so much more than me. Suddenly, in the midst of finishing another school year, I found the first day of my session much closer than anticipated, and my nerves started to grow alongside my excitement. Would I find friends? What if I didn’t know enough about science or technology to belong? What if I didn’t even understand the lectures?

A week later, I found myself standing at the gates of our residential college, knowing the next two weeks held the answers to those questions and many others. What quickly became apparent as I introduced myself to other students was that YYGS is an atmosphere unlike any other. Immediately, I found so many welcoming, open-minded and interesting people that I made friends faster than I have in any other setting. Most importantly, these people didn’t judge me based on my “intelligence”, and so it really didn’t matter how much I knew about science or technology. My understanding (or lack thereof) of the intricacies of genetic engineering were irrelevant to students more interested in who I was and what I was curious about. As for my last question, well, there were still concepts in some lectures that I didn’t understand. However, I not only became comfortable with not knowing, but I was also able to extract much more information and ask critical underlying questions that I wouldn’t have thought of otherwise during our breakout sessions.

With my initial worries taken care of, I was ready to delve into the academic agenda ahead. I knew from trying to choose my favorite seminars that there was an incredible breadth of topics to be covered. During my time at Yale, I encountered everything from challenges behind treating psychiatric disorders to chaos in outer space to the complexity of allergic reactions, and yet, YYGS still managed to offer me things beyond this impressive academic scope. Between intriguing discussions, bonding over ice cream, and climbing 14 floors of book stacks for fun, I met and befriended amazing people hailing from six continents!

Living, learning and eating among entrepreneurs, actors and researchers demonstrated to me that I am fully capable of creating new knowledge and solving pressing global issues. Similar to the process behind our culminating capstone project, we already have the skills and resources to identify issues we’re passionate about and take the initiative to be the solution, learning and growing every step of the way.

At the end of two intense weeks, it came time to begrudgingly head home. That’s when I realized that on the first day, we discovered participants had travelled anywhere from half an hour to over 30 hours to attend the program, but by our last day, no one wanted to travel any amount of time away from their friends and instructors. Simply put, at YYGS, strangers become family. When I want to remember why those two weeks were some of the best of my life, I need only to point to the impactful relationships everyone formed. Thank you YYGS, for providing me with the experience of a lifetime.
Labels: 2018 FST