"People, whether the instructors or the students, are the essential part of YYGS, giving the program its heartbeat." 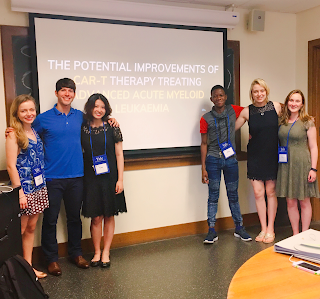 We are the future scientists, striving to create a better world by pushing the boundary of current scientific research. During my time at FST, I was surprised to meet the plethora of minds from diverse backgrounds and deep engagement with stories of their own. Despite our differences, though, we all shared a passion for science and concern for our global community. People, whether the instructors or the students, are the essential part of YYGS, giving the program its heartbeat.

Each night after finishing work on the capstone project,  my friend Sophia and I would walk past the stunning Sterling Library on our way back to Davenport. The sapphire night sky was the backdrop to our discussion on how we’d approach our research on treating Adult Acute Myeloid Leukemia based on my instructors’ advice. I would open the Google Doc at 9 PM and still find moving lines of edits and new boxes of comments. My group’s research focused on a new cancer therapy called CAR-T. As my group delved into the topic, we were amazed by the depth of current research on how CAR-T treats leukemia even though the topic seemed very specific to us. There was so much to know and to analyze in the scientific reviews. Even though the topic was complicated, nobody in my group gave up on it. In fact, in Sophia’s shining blue eyes, I saw our shared indefatigable curiosity. I became more certain to pursue a Ph.D. degree in immunology, to join the search to cure cancer for the well-being of the human race.

If the Capstone is the process of global scholars exploring, the lectures and breakout sessions are the time to learn and discuss. As a biologist, I am fascinated by flatworms and their regenerative characteristics. I felt hopeful for the researchers to uncover some fascinating stem cell mechanism and to apply the research to the medical field in the future. On the other hand, I initially thought that the lecture on robots was going to be dull because I imagined an old professor going through the technical concepts of building electric circuits. But I was so wrong. The unexpected images of cute robots and their lovely interactions with children with autism touched my heart. The professor was so brilliant that he brought the robots to life. His enthusiasm took me into the world of robots. In the breakout session, I was actively talking about my admiration for the professor and his robots. I could see that my peers were equally fascinated and wanted to understand the technology more.

YYGS is more than the cheers while playing Secret Hitler during family time; more than laughter on barbecue day; more than the memes on the simulation Tumblr page; more than the pretty summer views in Davenport courtyard; more than the tempting Yorkside pizza; more than the scholars sweating in the late night party. The beautiful time at YYGS will be forever missed. Goodbye, sweet summer of 2018.