"YYGS provided a base, but the true education and growth came from the people we met along the way." 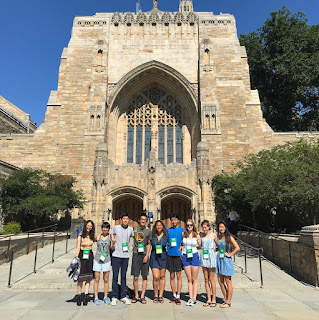 I have often been told that I am addicted to coffee, so the fact that I found YYGS to be like a cup of cappuccino, which happens to be my favorite caffeinated drink, should really be no surprise.

There’s many places that a cappuccino can go wrong: the ratio of coffee to milk, the mix of sweet and bitter in its flavour, and even in the addition of (unnecessary) sweeteners or similar décor. But most importantly, there is the foam. The foam is the element that makes or breaks a cappuccino, even if the coffee itself is of bad quality. The foam must absolutely, under all circumstances, be perfect – or the cappuccino is no longer a cappuccino.

Sometimes the foam is too bubbly, the air taking all the creaminess away to turn the coffee into a bubble bath. The base becomes too bitter then, because the milk is barely there, and the foam itself cannot be enjoyed fully due to its strenuous effects on one’s digestion.

Other times the foam is not bubbly enough. The creaminess overwhelms the air and makes the milk sink into the coffee, creating a sludgy mess which both looks and tastes equally as disappointing. The quality of the base does not even matter, because there is no base to judge.

Now, YYGS was not the perfect cappuccino by far – it has quite a way to go on its ratios, its flavor and in its exclusion of syrupy embellishments (because something as sweet as syrup should never be in a cappuccino, despite what Starbucks or Willoughby’s will try to tell you). But what the program did get right was the foam.

And by the foam, I am referring entirely and completely to the people who made SDSE the way it was, through the countless quirks, interests, and contemplations. The way I have come to see it is that YYGS provided a base, but the true education and growth came from the people we met along the way.

Personally, I became more self-confident. I was able to share my experiences without giving up and running away, mainly due to my friends’ encouragements and their own willingness to take risks, despite the possibility of public humiliation. I was able to participate more in everyday life, whether it be seminars, lectures, or simply hanging around the courtyard and going out for coffee, because seeing everyone around me so engaged and involved made me reconsider my own perceptions. I was able to talk about things I considered regular and see them from an outsider’s point of view, able to reveal my struggles, finding out they really weren’t as uncommon as I had thought. I grew in every single way.

For others, it may have been different. Their foam was perhaps worse than desired, maybe they even preferred the cappuccino base to the foam. For me, though, the foam I found at YYGS was as good as that of my favorite soy milk cappuccino back in Mostar – one which has provided me with warmth, safety, and happiness, despite how quickly it might have vanished from my cup.