"I was taught to take everything I know as true and question it, tear it apart, dissect it into its rawest form. I emerged not only stronger in my beliefs but also a more passionate and eloquent defender of them." 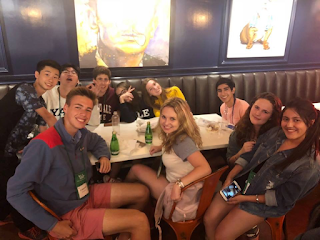 Hi, I’m Sydney from Boca Raton, Florida. Like so many before me, I came to Yale to learn. Through the entire YYGS application process up until the moment I walked into Pierson College, I had the unadulterated intention of gaining information and learning material. It would be a tremendous misstatement to say that I did not learn at YYGS. I learned more in these two weeks than in any other experience of my academic career. But though I anticipated to learn content and information, the YYGS staff and my fellow participants taught me far more than that. Instead of learning facts about international relations, I was introduced to new perspectives on what international relations are in the first place. Why should we interact on a global scale? How can we?

I think the most important thing I learned at Yale is that the more fundamental a question is, the easier it is to neglect, the harder it is to answer, and the more important it is to ask. I was taught to take everything I know as true and question it, tear it apart, dissect it into its rawest form. As a result, I emerged not only stronger in my beliefs but also a more passionate and eloquent defender of them. My experience at YYGS has left me with something profoundly more important than facts and stories; it has left me with a new way of thinking and interacting that I can apply in or outside of the classroom and that will last far beyond my schooling. So yes, academically YYGS was more than I ever could have anticipated.

However, I was blindsided by the social opportunities that I was also presented with at Yale. As I mentioned initially, I came to Yale to learn. Thus, I was caught off guard by the warm community of intellectually engaging and incredibly diverse teenagers that greeted me. I was overwhelmed upon meeting my suitemates, few of whom even came from my continent. Nonetheless, within days I developed a strong and undeniable bond with people I never otherwise would have had an opportunity to interact with. From Brazil to Moldova, Zimbabwe to South Korea, the delegates from each of the 126 countries represented at my YYGS session became not only sources of new knowledge and perspectives, but also genuine and true friends. I do not hesitate to say that I learned as much in my conversations between lectures as I did in the lectures themselves. YYGS has presented me with a unique and truly once-in-a-lifetime opportunity to learn, grow and change in a diverse and warm environment for which I will be forever grateful. Thank you!