"In just a day I found myself discussing in depth at least five different important issues in the world."


What is the first thing you do in the morning?

My answer used to be get out of bed, after my alarm was almost about to give up on ever waking me up, eat a quick breakfast and leave for school.

Around three years ago, I added a new step in my routine: read the top news that had surfaced during the night, simply to be more aware of what is happening in the world. And I, who have always had trouble being properly awake before at least 9am, am often forcibly woken up by violent slaps in the face the world news hands me at 7:30am. To give you an idea, yesterday October 19th, 2018, my sleep deprived eyes saw that the news that documents were released which showed the help Argentina offered to Nazi war criminals, the next headline was telling me about a school shooting which killed 19 people in Crimea. That was all I could stomach before I had to turn my phone off.

So, it is safe to say that with all the horrifying news we see every single day, there is reason enough to be absolutely desperate about the state of our world at the moment. That was my exact mindset at the start of summer 2018 before taking the plane from Paris to New Haven for YYGS. 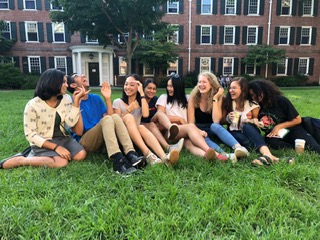 However, everything I did and saw at YYGS gave me strength for our future. As part of the Politics, Law and Economics session, I discussed large scale issues our world is facing now. Most notably, the variety of topics we discussed was very interesting.

For example, one day I started with a lecture centered around economics talking about “International trade and the surprisingly swift decline of US manufacturing”, then I continued the morning with a breakout session where we looked at certain aspects of the lecture in smaller groups. At lunch, I had an enlightening conversation with some of my friends about the legality of prostitution across the world. The afternoon I attended a brain twisting seminar called “Killing, saving and letting die: the ethics of self-driving cars”. I finished the day with a meeting with my capstone group where we were investigating ways to facilitate girl’s access to education in India as part of the capstone group “Poverty and equity alleviation”. In just a day I found myself discussing in depth at least 5 different important issues in the world.

What I especially loved when we were talking about all those different topics, was to see the enthusiasm of my peers after every single lecture, seminar or even casual conversation we had. It might seem very cliché, however I can only describe it as seeing some kind of light turning on in their eyes which showed their burning desire to do a change in this world, a change for the better.

Another aspect of YYGS I was surprised about was the tolerance present in all of our conversations. As a French and German citizen living in Paris, I have experienced on numerous occasions the kind of clash differences in culture and opinions can create. In YYGS we were all from such different backgrounds that I thought it would inevitably happen at some point and I was proven wrong. Indeed, we did disagree and had a lot of heated debates, however they were never actual arguments. They were respectful and enabled us to open each other to new perspectives, opinions and point of views that differed from our own; however, that didn’t mean they were wrong, that didn’t mean we couldn’t be friends, have civilized conversations, learn together, or have fun.

So, thank you YYGS and everyone in my session for teaching me so much and for giving me hope for our future.
Labels: 2018 PLE