"[YYGS] prompts me to be someone better, more socially engaging and certain that my efforts could make a difference."

While Mahima and Shahin were introducing their original Hindu names, people frowned and mistook me as having some Irish origin when I said, “Call me Liam.” 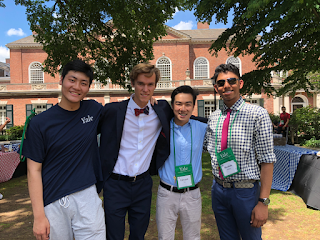 I began contemplating having an English name. Since starting at an international boarding school in Beijing, I have been using English names frequently. People referred to me as Liam, knowing that it’s named after a character from my favorite show, yet few understand what my Chinese name Chonghao stands for. Translating to “reach higher than the sky,” Chonghao motivates me to be more explorative while always staying grounded. That’s why YYGS is so impactful for me personally, that it not only produces a hub where people learn others’ cultures, it’s also a process to rediscover our own character and rethink established personal identities. At “To be _______: Citizenship, nationality, and who get to belong”, we not only broke down the legislation part of citizenship. The session extended to probe into the very essence of citizenship deeper than a printed passport — a mutual agreement to share responsibility. When a boy whose family used to be at North Korea talked about his notion of citizenship, it led me to think about the extent to which I’d like to hold my mutual agreement with my government. At another political philosophy themed seminar, my understanding of topics like democracy or Marxism was able to transcend the boundary of mere definition or slogans like "democracies are good” or “Marxism as the foundation of our country.” In the classroom of John Whalen, my instructor of “IAS01JW Does History End with Capitalism:  An Introduction to the Thought of Karl Marx”, I was able to delve into the beliefs of Karl Marx from multiple dimensions, from philosophical conception to possible applications. Demonstrating the social risks that capitalistic societies are facing, the seminar served as a channel for me to explore my own political attitude and reevaluate the ideology instilled in me from education.

Equally essential to the program are the scholars. YYGS provides a fantastic network to me, a lens through which I look out of my Chinese high school's peers’ accomplishments and pushes me to adjust my goals as well as my personal aspirations under a global context. From a Kurdish regional representatives intern at UN to a boy who started his own book project providing continued education for refugees, to the Macedonian girl who ranked top three in skiing nationally, these people prompt me to be someone better, more socially engaging and certain that my efforts could make a difference. In the following semester, I planned to intern at the biggest NGO in China which provides pro bono legal service for LGBTQ+ groups.

It’s for YYGS that I started to develop the confidence, the ambition, and the skills to imagine a life in alternative to the middle-class routine. This two weeks will constantly remind me of my social responsibility, something defining a Yale Young Global Scholar.
Labels: 2018 IAS